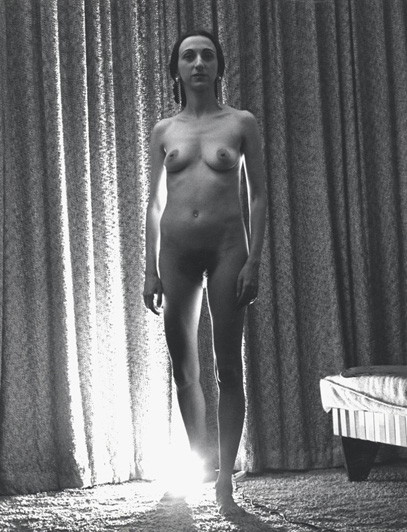 Judith Malina. December 1996.: "Weegee always wanted everyone to take their cloths off, men & women alike... Late one night, after the San Remo Cage closed, Weegee accompanied me home, and asked to take a nude photo. I had no inhibitions, only the demand that we not extend the nudity into sexual play - and he agreed. Weegee was very particular about the placement of the lamp. (We had floor lights in our living room because we performed there - our Theatre-in-the-room productions of Stein, Brecht, Lorca & Goodman). Weegee wanted the light to shine at just a certain angle behind me. And though I had often known him to be amorous, at this session his interest was patiently and entirely on the quality of the light & the pose - rare for a photographer known for his speed & spontaneity."