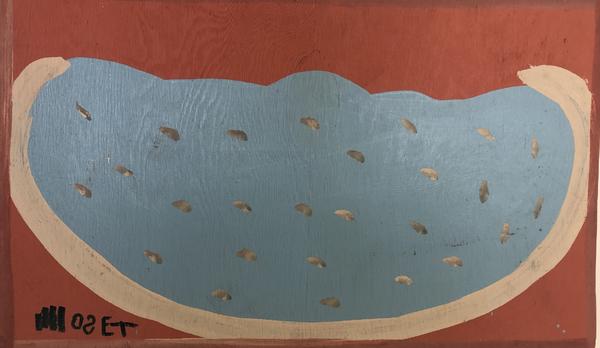 Mose Tolliver (ca. 1920-2006, Montgomery, AL) began painting after an industrial accident left him handicapped in the mid 1960s. He sold his early work for cheap, or traded it for food, until he was featured in the Black Folk Art in America show at the Corcoran in 1983. He has since become one of the most enduring and widely collected self-taught artists of his generation. He painted actively until 2002. //// Volk Art: The term generally encompasses craftsmanship and decorative skill, which is mainly practiced in rural communities. //// Outsider Art: The term describes art by self-taught or naive artists. Typically outsider artists have little or no contact with the mainstream art world or art institutions. In many cases, her work is discovered only after her death. Outsider art often illustrates extreme mental states, unconventional ideas or sophisticated fantasy worlds. Outsider artists who work outside and often without knowledge of the artistic institution - are often praised for their raw talent, their innate urge and their authentic vision. /// A key distinction between folk and outsider art is that folk art typically embodies traditional forms and social values, where outsider art stands in some marginal relationship to society's mainstream.