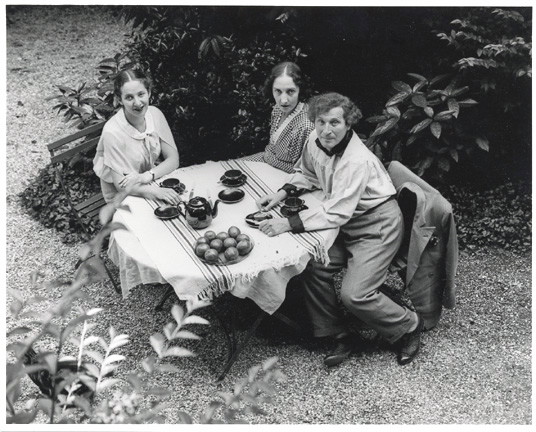 Marc Chagall and his Family, Paris

Signed recto by artist /// André Kertész (American, born Austria-Hungary), 1894–1985. Son of Jewish parents in Budapest. Even as a child, he loved to roam the area and watch his surroundings carefully. Kertész experienced the First World War as a soldier in the hinterland. After the war and the collapse of Austria-Hungary, a long-lasting economic crisis soon drove him to Paris. There he met Piet Mondrian, Fernand Léger and Ilja Ehrenburg, made friends with Hungarian writers and artists and now developed the narrative, often dreamy photography that made him world famous. André Kertész is the poet among 20th century photographers. His source of inspiration was Paris. There he moved through the streets with his camera and transformed people and things into a symbolic visual language with which he spoke of hope and longing, of sadness and loneliness. “My photography is actually a visual diary. Above all, it is a tool for describing and expressing my life, just as poets and writers describe their life experiences. ” Kertész made contact with German and French magazines and worked for the photo magazine "Vu", which appreciated his unusual look. He took part in exhibitions and was successful. In 1936 he went to New York with his wife, where he wanted to pursue a career as a photo journalist. Unfortunately, his work was not valued as much as in Europe, so he had to work as an advertising photographer. (Source: deutschlandfunkkultur.de)