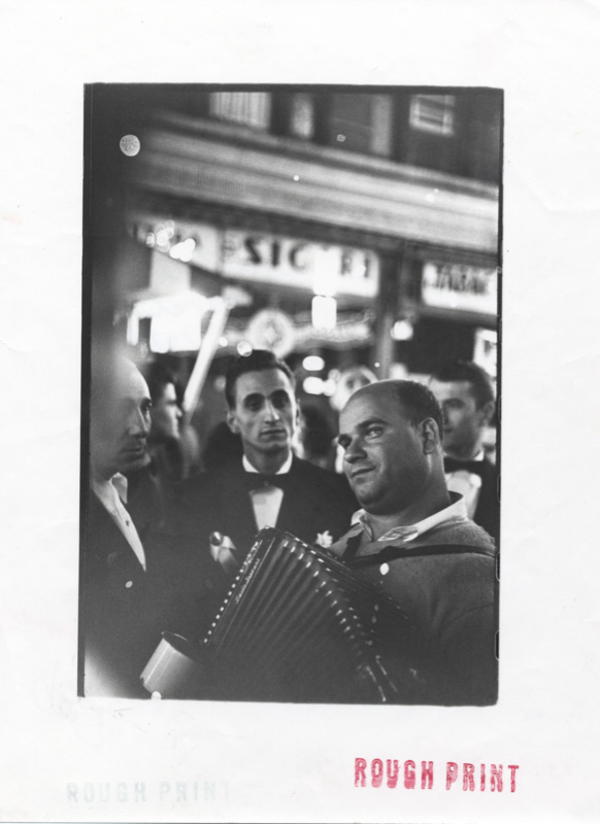 Provenance: Louis Faurer, Gerd Sander Collection /// With inscription by Louis Faurer to Gerd Sander 1979 //// Provenance: Louis Faurer, Gerd Sander Collection /// With inscription by Louis Faurer to Gerd Sander 1979 //// Shown here is the San Gennaro Festival in New York, which also was photographed by Sid Grossman in the same year. Sid Grossman is on of the most important artists and teachers in photography. 1936 Grossman and fellow photographer Sol Libsohn founded the Photo League, where they offered classes in photography primarily to young, working-class New Yorkers from Brooklyn, the Bronx, and the city's Lower East Side. In the Photo League's early years Grossman advocated the use of photography as a tool for social reform, but during World War II he embraced a more creative approach. Thereafter he urged those who studied with him to break all the accepted rules of photography—to use available light, for instance, and to allow photographs to be blurred, out of focus, off kilter, and even apparently random in choice of subject matter. In essence, he encouraged his students to do anything that would enable them to capture their experience of the world rather than simply to document what they saw. Photographing at a very close distance and using blur and off-kilter compositions, Grossman’s work of the late 1940s anticipates the work of many better known street photographers of the 1950s and 60s. Among them is Lisette Model and Leon Levinstein. Traits of Grossman’s work and philosophy can be seen in the work of Louis Faurer.